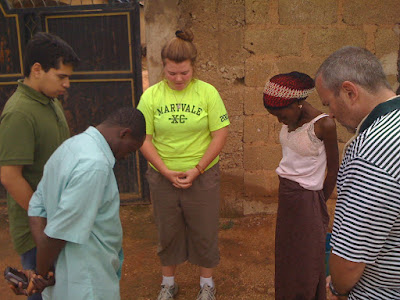 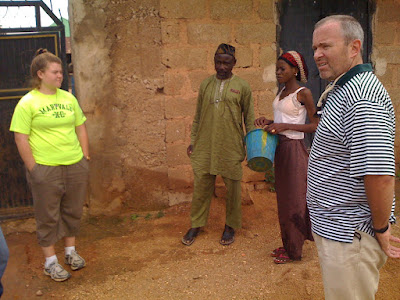 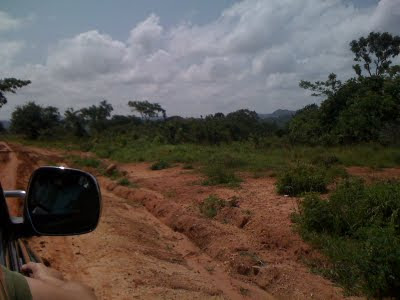 Faith Alive Hospital Team:
Today has been another full day at Faith Alive Hospital for the team. We were told that the storm the other night was the worst one in 30 years. This morning they attended a daily health talk and prayer session, led by Erika Nossokoff. On the first Thursday of each month there is a additional focus and prayer dedicated to a certain topic. Today, Pastor Ben announced that we would be praying specifically for Dr. Chis and his leadership of Faith Alive Hospital. After prayer, worship and singing the team jumped in to the mix at the hospital.

The team participated in a home based care visit. This is one of the outreach ministries of Faith Alive Hospital to the rural community surrounding Jos. The team met Ladi, a woman who came to Faith Alive Hospital to be tested and was informed that she has AIDS and TB. Since that time, she has become too weak to make the long trip to Faith Alive Hospital. Each day, someone from the hospital travels to her home to make sure that drugs are being administered properly and necessary hygiene is being maintained. The team also had the opportunity to pray with her at the end of their visit.

Jonathan joined Dr. Chris as he diagnosed a patient with hypertension and high blood pressure. Emma, Bill and Brian sat in on sessions at the counseling center. After receiving HIV/AIDS testing, patients are met individually in the counseling center to discuss their results. The team was witness to patients receiving both positive and negative results. They were also tested themselves.
At the afternoon staff prayer and worship session everyone joined in the "laying on of hands" in praying for Dr. Chris. The staff members also assign a "Captain" for the upcoming week. This person is responsible for observing different areas of the hospital, asking questions, and writing a report at the end with his or her findings. They chose Brian to take on this responsibility for the upcoming week. At the end of the afternoon, after all of the counselors had gone home, Jonathan and Dr. Chris met with a patient who was just being told of her HIV+ diagnosis.
Anawim Home Team:
Last night the team had the opportunity to slaughter a chicken and prepare it for dinner. They then received a welcome surprise of french toast for breakfast this morning before jumping in the van and heading off to Benin City to visit with Sister Oresoa's family.

The drive to Benin City was about five hours, which Kathi described as an "adventure." They even had some walnuts from a street vendor on the way. The team is staying at a monastery in Benin City, which has running, and even sometimes "hot" water. The team described the monastery as "beautiful" - although they didn't do too well with the "silent" dinner. They will be attending a funeral for a friend of Sister Oresoa's Friday and Saturday. The team brought rice with them and will be serving the street boys and mentally ill in Benin City as well. The team is in great spirits, having an exciting time with Sister Oresoa, and becoming closer by the day.
Photos:
1. Jonathan, Emma, Ladi & Bill in prayer
2. Jonathan, Emma & Bill visit Ladi's home
3. Travel outside of Jos
Posted by NATIVITY:NIGERIA at 11:26 AM

Gotta say Bill's beard is looking like it is shaping up nicely...
Mitch