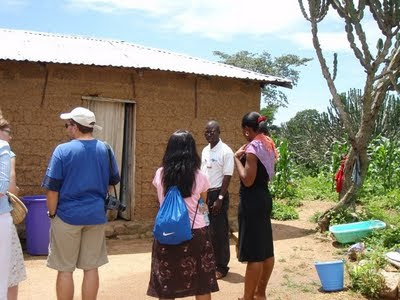 A former HIV patient himself, Ashom is a Home-Based Care Team member who brings Faith Alive services to families and communities, who otherwise will not have access to this medical care and spiritual support

"Lotti" has tuberculosis (TB) and AIDS, and lives with her brother and sister and their families. Her sister first took her to Faith Alive Hospital when she was so sick she couldn’t even walk. She is now able to stand up, and is getting better. But she cannot come in to the clinic so the Home-Based Care team brings the clinic to her, providing medication and spiritual support. To get to her house, it was a bumpy unpaved but scenic road and probably very muddy during the rainy season. We had an opportunity to pray with her for healing, comfort and strength and the health of her family.

The other patient we visited was an older gentleman. We passed through a Muslim community and there was a herd of kids just excited to see us, following wherever we were going and just hovering around. This man was sitting on a concrete ledge just outside his room. He seemed to be pleased to see us and shook our hands as Ashom, a HBC Team member, introduced the group. The patient was quite thin for a tall man and I noticed that his feet were swollen. Ashom tells us that he is much improved from his previous status. He has been able to take his anti-tuberculosis drugs, has a room by himself (which he needed being inflicted with TB), and someone helps bring him cooked food. He proudly reported that he has been able to walk and move around much better. That was reassuring since he still looked pretty frail and sickly. After the group said a short prayer, we said our good-byes and he expressed his gratitude for the care he has been given. Even the kids were cheering “Nagode, nagode, nagode!!” which means “Thank you!” It was heart-warming to see that even they appreciate what it means when there’s a Faith Alive jeep pulling in their street.

We were all moved. We are seeing God and so many miracles. If it weren’t for the Home Based Care Program, these two patients would not have been able to get the continuing care they needed. It would also be a huge burden to the family members to bring them to Faith Alive Hospital. These home visits allow team members to reinforce the good progress they have made and to encourage the family members in the care for their sick loved ones. In the spirit of FA’s mission, it also gives them spiritual support as they pray together with the visiting team.

Ashom is one of this team members who has been diligent in his work and took us for a ride for these home visits. Thirteen years ago, he himself was seriously sick and being treated for ulcer, typhoid fever and malaria when he found out he was HIV positive. Like other patients, he could not afford the N40,000 ($275) to pay for his drugs. How can they when the minimum wage is N5000? He also has a family of 5 kids to support. It was then that Dr. Chris visited him and encouraged him to come to Faith Alive. As he was being treated for tuberculosis, he was placed on the waiting list for the anti-HIV medications. This was also the time that his HIV-positive wife passed away and he became a single Dad. Despite this overwhelming grief, he found strength to help others in a similar situation. Under the wing of another HBC Team member named Ezekiel, Dr. Chris offered him a job, realizing his need and knowing the huge responsibilities of a single parent of five.

Ashom is also a member of the Faith Alive Support group and is a living example of what it is like to “live positively” despite the HIV diagnosis. He and the other staff members remind patients that this is not a death sentence. This is quite difficult to do in a culture where people with AIDS are sometimes still treated inhumanely and left to their deathbeds. He is literally a face of this program and you can see him on the HBC posters and pamphlets. He is very grateful what this hospital has done for him and proud to share his story so that others can find hope the way he did when he was given a chance go to Faith Alive. This is his own way of giving back and helping carry out their mission of “investing in and infecting lives for Jesus Christ our savior.”
Posted by NATIVITY:NIGERIA at 11:01 PM